The Newborn’s Characteristics at First Glance 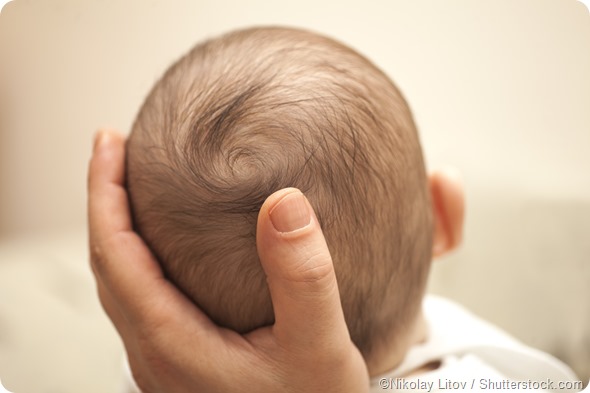 You may be concerned about the two fontanels (“soft spots”) on your baby’s head. These are areas where the skull bones have not yet joined, but instead are held together by membranes. They facilitate the molding necessary during delivery and allow for further growth of the skull after birth. The posterior (back of the head) fontanel is triangular shaped and will close by around 6 weeks of age. The anterior (top of the head) fontanel is diamond shaped and will close by about 18 months of age. You should not worry too much about harming the baby in these areas because the fontanels are covered with a tough membrane called the dura.

A cephalhematoma may appear on the head during the first few days as a result of pressure. This collection of blood is noticed as a bump under the scalp. It gradually increases in size and may take months to reabsorb and disappear. It can be caused by the use of a vacuum extractor, the application of forceps, or the baby’s head pressing against the pelvic bones during labor or birth.

Some babies are born with a full head of hair. Others are bald. If your baby is born with hair, he will probably lose at least some of it and possibly even all of it.

Don’t worry if your baby’s eyes are crossed at birth. The eye muscles are still developing, and the eyes should focus together by around 6 months of age.

You may notice milia (little whiteheads) on your baby’s chin, nose, and cheeks. These are immature oil glands and will go away without any treatment when the glands begin to function. Do not attempt to remove them.

Your baby will blink at bright lights and may not nurse well or look at you if a light is shined directly in his face. In addition, he may appear cross-eyed when he looks around. This is because his eye muscles are not well developed. By 6 months of age, his eyes should be focusing together. If not, your pediatrician will refer you to an ophthalmologist (a medical doctor who specializes in eye disorders).

Tearless crying is common in newborns, as the lacrimal glands that produce tears are not completely functional. It could be many months before your baby begins to cry real tears. You might notice some swelling if silver nitrate was placed in your baby’s eyes after birth. If a discharge is present, your pediatrician should be notified, as this may indicate that the tear ducts are blocked. He may order an antibiotic ointment or instruct you in a massage technique designed to open the ducts. The whites of your baby’s eyes may display small hemorrhages caused by pressure during birth. These hemorrhages could take several weeks to disappear.

Not to WorryThe following are common, normal newborn variations that may surprise you:

[raw]Keep in mind that this list is not inclusive. Your newborn may display a variation that is not noted here, but that nevertheless is common and normal. Talk to your pediatrician if you have any concerns.[/raw]

For years, mothers were told that their babies could not see until they were several weeks old, but many mothers continued to feel that their babies did indeed look at them. Research has proven that even though their vision is not perfect, babies are able to see, and their best vision is at a distance of 8 to 10 inches.

Even before birth, a fetus exhibits sensitivity to sound. Hearing becomes more acute within several days following birth as the amniotic fluid is absorbed. Loud noises will be disturbing to your newborn, while soft, soothing voices or sounds will quiet him. Many babies react positively to their parents’ familiar voices.

The senses of taste and smell will be well developed in your newborn. Your baby may react negatively to someone wearing heavy perfume or smoking. Research has shown that by the age of 6 days, a baby can recognize the smell of his own mother.

You may notice clusters of small capillaries on the nape of your baby’s neck, on his eyelids, or on the bridge of his nose. They are minute blood vessels close to the skin. These “stork bites” or “angel kisses” are more obvious when the baby cries. They usually fade by 9 months of age.

Your newborn’s skin will be very sensitive. If he becomes chilled, his skin will appear blotchy and skin capillaries may be apparent. His hands and feet may become slightly bluish. If he is overdressed or wearing irritating clothing, he may develop a rash. Another harmless rash, known as erythema toxicum, may also appear during the first days after birth. This rash resembles a heat rash—red splotches with small yellowish white bumps in the center. It does not appear on the extremities and has no known cause. It will disappear without treatment in a few days.

Your baby may be covered with fine downy hair called lanugo. Lanugo is seen more frequently on preterm babies and less frequently on those born past their due date. It usually disappears within a few weeks. Your baby may also have dry, scaly skin, most noticeably on his hands and feet, with some peeling occurring 1 to 2 weeks after birth. Avoid using lotion or oil, especially if the skin is cracked.

Dark- or olive-skinned babies may have purplish brown discolorations on their lower back. These are called Mongolian spots and fade by 1 year of age.

Your baby’s breathing will be fast (20 to 60 breaths per minute), irregular, shallow, and abdominal in nature. It may be noisy at night. The hiccups you may have felt during pregnancy will continue until the baby’s diaphragm matures. The baby’s heart rate will also be rapid, between 100 and 160 beats per minute. When the baby cries, his heart rate may accelerate to 180 to 200 beats per minute.

Both newborn boys and girls may have enlarged breasts due to hormones that crossed the placenta while the baby was still in utero. They may even secrete some milk (“witch’s milk”) within the first 2 weeks of life. Female babies may also have some vaginal bleeding, or “false menstruation,” due to these hormones. The genitals of both sexes may be enlarged or swollen, with a little girl’s clitoris and labia possibly large enough for her to be mistaken for a boy at quick glance. Your son’s scrotum may be swollen and darker in color. His testes may move in and out of the scrotum. They may retract as far as to the crease at the top of the thigh. As long as they are located in the scrotum most of the time, they are normal.

The umbilical cord stump will dry up and fall off in 1 to 2 weeks. His abdomen will be round and protruding. This is due to poor abdominal muscle tone, relatively long intestines confined to a small area, and, possibly, to swallowed air.

Your newborn’s arms and legs will be proportionately short for his body. He will tend to hold his arms bent and close to his chest, with his hands clenched in fists. He will hold his legs, which may appear bowed, in a position that is probably similar to what he had assumed in utero. His nails may be very long at birth and need cutting. They will be soft and pliable, and should be filed for the first few weeks to prevent bleeding. After that, you will be able to trim them with baby scissors or clippers. You may find it easiest to do this while the baby is sleeping.

Certain reflexes will be present in your newborn at birth. Some of these will be vital to his survival. All are signs of gestational maturity. Many he will have “practiced” while in utero.

Your baby’s sucking reflex will be very strong soon after birth. Any stimulation of his lips will elicit sucking motions. It is not unusual to see a newborn sucking on his thumb, fingers, or fist. This is just a continuation of what he did before delivery. You may even see bruises on his hands or arms from sucking in utero. The swallowing reflex is also present prior to birth, since the fetus swallows amniotic fluid and then urinates into the fluid in the amniotic sac. If you stroke your baby’s cheek or lips, he will turn his head in that direction and open his mouth. This is called the rooting reflex.

Several protective reflexes are also apparent at birth. These include the gag reflex, which prevents choking, and the cough reflex, which gets rid of mucus. Even a newborn instinctively attempts to protect himself. If his face becomes covered with a blanket, he will flail his arms and move his head to remove the cover. If a limb is exposed to cold, he will draw it close to his body to warm it. If he is pinched or stuck with a pin, he will quickly withdraw.

If you place your fingers in your baby’s palms, he will grasp them tightly. This is the grasp reflex. Your baby’s grasp may even be strong enough to allow you to raise his body up. (Do not try this, however, because he may let go and fall.) If held under his arms in a standing position, he will make walking motions. This is the stepping reflex. When your infant is lying on his back, he may assume a “fencing position” with his head turned to the side. The arm on that side will be extended, and that leg flexed. This is called the tonic neck reflex. If the baby is startled, he will thrust out his arms as if to embrace you in a movement that is called the Moro reflex.

Two reflexes can be observed involving the soles of the infant’s feet. The plantar toe reflex causes the toes to curl if you press your finger at the base of the toes. If you stroke the sole from the heel to the toes, you will notice that the foot hyperextends and the toes fan outward. This is called the Babinski toe reflex.